It is different from the adjective "advanced" which means far ahead in technological development.

An aerodrome is a location from which aircraft flight operations take place, regardless of whether they involve air cargo, passengers, or neither. Aerodromes include small general aviation airfields, large commercial airports, and military airbases.

The term airport may imply a certain stature (having satisfied certain certification criteria or regulatory requirements) that not all aerodromes may have achieved. This means that all airports are aerodromes, but not all aerodromes are airports. Usage of the term "aerodrome" remains more common in the UK, Ireland and Commonwealth nations

According to the International Civil Aviation Organization (ICAO) an aerodrome is "A defined area on land or water (including any buildings, installations, and equipment) intended to be used either wholly or in part for the arrival, departure, and surface movement of aircraft."

The word aerodrome derives from Ancient Greek ἀήρ (aḗr), air, and δρόμος (drómos), road or course, literally meaning air course. An ancient linguistic parallel is hippodrome (a stadium for horse racing and chariot racing), derived from ἵππος (híppos), horse, and δρόμος (drómos), course. A modern linguistic parallel is velodrome, an arena for velocipedes. Αεροδρόμιο is the word for airport in Modern Greek, which transliterates as aerodromio.

In British military usage, the Royal Flying Corps in the First World War and the Royal Air Force in the First and Second World Wars used the term—it had the advantage that their French allies, on whose soil they were often based and with whom they co-operated, used the cognate term aérodrome.

In Canada and Australia aerodrome is a legal term for any area of land or water used for aircraft operation, regardless of facilities. International Civil Aviation Organization (ICAO) documents use the term aerodrome, for example, in the Annex to the ICAO Convention about aerodromes, their physical characteristics, and their operation. However, the terms airfield or airport mostly superseded use of aerodrome after World War II, in colloquial language.

In the early days of aviation, when there were no paved runways and all landing fields were grass, a typical airfield might permit takeoffs and landings in only a couple of directions, much like today's airports, whereas an aerodrome was distinguished, by virtue of its much greater size, by its ability to handle landings and take offs in any direction. The ability to always take off and land directly into the wind, regardless of the wind's direction, was an important advantage in the earliest days of aviation when an airplane's performance in a crosswind takeoff or landing might be poor or even dangerous. The development of differential braking in aircraft, improved aircraft performance, utilization of paved runways, and the fact that a circular aerodrome required much more space than did the "L" or triangle shaped airfield, eventually made the early aerodromes obsolete. The city of the first aerodrome in the world is a French commune named Viry-Chatillon.

Aft -  referring to the back part of a plane. Rear is also used with the same meaning. It contrasts with forward. 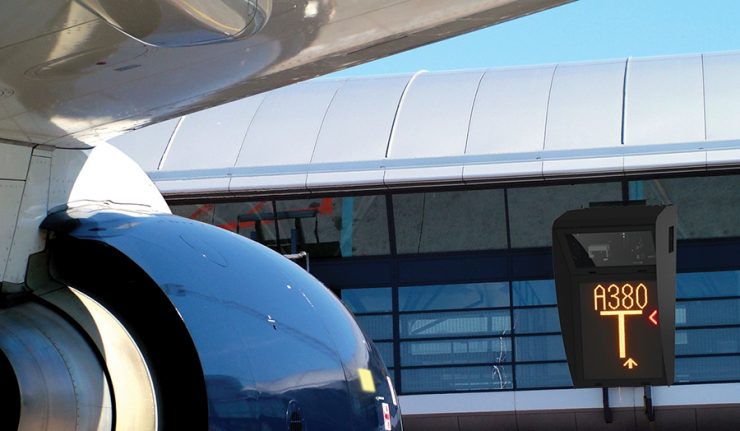