In a previous article, Describing pictures in ICAO Aviation English tests we learned some techniques to describe pictures.  One of the lexical sets we said was necessary was vocabulary to describe an aircraft.  In this article we will focus on how to describe the physical structure of a fixed wing aircraft, and also cover some grammatical structures you can use to relate the information.  Of course many pilots will already be familiar with these words but it is worth ensuring that you can use the words with correct grammar, eg prepositions.

Most aircraft have the following major components.

Describing the fuselage and substructure

The fuselage is the central structure of an aircraft and includes the cabin, cockpit and area for storing cargo.  When describing the fuselage also consider the materials it is made of, and how it is constructed.  You should also know the following vocabulary:

Structure: You can also use the following verbs to describe the fuselage.  Be aware of the form of the verb eg feature / features, and also if there are any necessary prepositions that go with the verb. 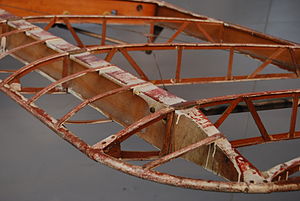 Wings are attached at either the top, middle, or lower part of the fuselage and are referred to as high-wing, mid-wing or low-wing.

You should know the following vocabulary:

Structure: In addition to being able to identify the above parts of an aircraft, you should be able to describe it's function.  You can use the following structures:

The empennage includes the entire tail section, consisting of the vertical and horizontal stabiliser. Basic vocabulary to describe the tail section includes:

Exercise: Describe the following picture using 5 of the words above. Aircraft can have different types of landing gear eg wheels, skis or floats depending on whether the aircraft is used on land, water or snow.  When describing landing gear consider what that particular type of landing gear is designed for.  Essential vocabulary includes:

Exercise: Describe the following pictures using 5 of the words listed above. There is a lot of vocabulary listed in this article, some of which you may already be familiar with - but learning English is not just a matter of remembering vocabulary.  In order to communicate effectively in English you must be able to use vocabulary with reasonably accurate grammar.  Try to create sentences using the structures presented above, or compare pictures of different types of aircraft.  There are a lot of interesting pictures on websites such as airliners.net that you can practice describing.

What to do next For feedback and more information about Aviation English Asia’s courses please visit http://aviationenglish.com.  We can help you improve your English whether you are an experienced pilot, a cadet entry pilot, a controller, aerospace engineer or flight attendant, with custom courses designed specifically for your needs.  If you haven’t already please join the Aviation English mailing list for special offers and details of courses in your area. Of course, feel free to leave a comment or even a suggestion for a future article.  We value all of your feedback.